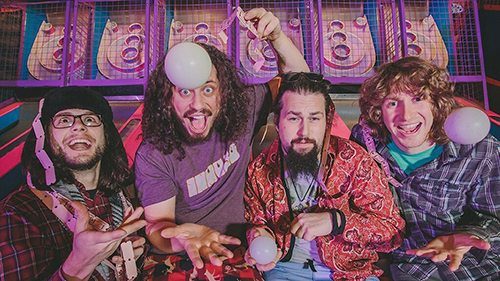 This Baltimore-based band’s infectious electro-funk grooves and undeniable live energy have earned them a fanbase called The Flock – and it’s growing every day.

Touring on the recently released album Pizazz, Pigeons Playing Ping Pong will be back to play for Flock members and newcomers at 9:30 p.m. on Saturday at Putnam Den, located at 63a Putnam St. in downtown Saratoga Springs.

Opening act Flamingosis – an electronic music producer, beatboxer and entertainer from New Jersey – will kick off the show before Pigeons Playing Ping Pong take the stage.

The Weekender caught up with drummer Alex Petropulos while the band was home in Maryland before making it up the coast for Saturday’s concert.

Q: You guys do a lot of touring. Has the band been on the road a lot lately?

A: Yeah, typically we’re kind of on the go year-round, every year. We more recently just did about a five-and-a-half week tour, mostly on the West Coast but at the end of it we looped back around up to the East Coast. It was great. We had a lot of fun. Some really great turnouts.

Q: You’re on a break right now though, right?

A: Yeah, we are in Baltimore. In fact, our last show was in Baltimore as well. It’s the first time in a bit we’ve played back in Baltimore but I think it was our most successful show to date. There was about 1,500 people there.

Q: You just released your new record Pizazz. Tell me about that album and what it means to you guys.

A: This is actually my first album with Pigeons. It was an awesome experience. Typically we’re a touring band. So we don’t get many opportunities to be in a studio environment, but our main goal was to kind of capture our live energy that we bring to our live shows and try to put that into an album format, which can be tough because a lot of times our live shows have a lot of improvisational jams and experimentation. So it’s interesting to get into a studio environment and dissect each song and decide which parts are going to be on the album version. It’s cool to mix it up that way too.

Q: Did you record Pizazz in Baltimore?

A: We recorded in Baltimore at Wright Way Studios with engineer Steve Wright. We had an excellent experience. It’s a very comfortable, homey very nice studio. And it was a very smooth experience. It can be very stressful being in the studio, but we were able to maintain a very (for the most part) relaxed attitude and it was overall a very good experience.

Q: Did you guys do most of the writing for Pizazz while you were in the studio or out on the road?

A: We’re kind of always writing. It was a combination of newer songs and some older songs that have evolved and haven’t really made it to an album format yet. We don’t have a set style for writing. We kind of have many funny, inspirational ways to write, which keeps stuff fresh and interesting.

Q: What’s your favorite song off of the new record?

A: Oh, man. Honestly, they all are just very fun to play. As far as a live setting “Ocean Flows” is usually a very fun, high energy song. That’s a good one for us to be able to jam on. I love all the songs. “Fun in Funk” is another good one that has a fun groove.

Q: Pigeons Playing Ping Pong have played at Putnam Den before. What are you looking forward to about coming back?

A: Oh yeah, we’ve spent many a night there. It’s just a great vibe. We love coming there. Last time we were there I believe we were with Dopapod, which was a great tour. We’re excited to be back and just play a high energy Pigeons headlining show. We’re also playing with Flamingosis who has been opening up a bunch of shows with us. He’s been great as well. He’s got a great vibe. Saratoga Springs, it just has really good vibes. We always have had memorable, fun shows there and I’ve always talked to people who love coming there. It’s just kind of a good hometown feel, a good environment for us to just let loose and play a Pigeons show.

A: We definitely have stuff lined up. We’re just getting into the phase of announcing some next year dates. As far as closing up this year, we still have a good run up Northeast, and then we get to our New Year’s Eve run, which we’re very excited about. Then we have a couple weeks off before our first trip to play at Jam Cruise, which we are very excited about. It’s a great lineup. It’s always been kind of a bucket lister for us, so we’re very excited for that. We also host a festival every year called Domefest, and we actually just today announced the dates for it. That’s actually like the one 2018 date that we have announced: May 17th through the 19th in Bedford, Pennsylvania. It’s gotten to a point where we have three days of Pigeons along with a good handful of really good up-and-coming bands from the jam scene. A lot of those bands are very dedicated to the music and it’s a good community of music-lovers. It’s great.

Tickets to Saturday’s show are $14 in advance or $17 the day of the event, available online at putnamden.com.

Ages 18 and older are welcome to attend. Those younger than years old will be charged a $5 surcharge.