Since 1995, Enter The Haggis have led the charge among Celtic Folk Rock bands, delighting fans with their memorable performances, inspired songwriting, musical proficiency and high quality recordings. The Toronto-based band has released eight acclaimed studio albums. Their most recent debuting at #9 on the U.S. national Billboard Heatseekers charts.

Their original songs such as “One Last Drink”, “Down With The Ship” and “Gasoline” have become folk rock anthems, appearing in films such as “Goon”, “10mph” and “Addicted to Plastic”, and reaching as high as #25 on U.S. radio.

The Fame Keeps Growing For Enter The Haggis

Praise for Enter The Haggis has appeared in major national publications, including The New York Times, The Boston Globe, The Washington Post and Canada’s Globe and Mail. The band has also performed on national television shows like “Live With Regis and Kelly” and “Breakfast With The Arts” on A&E.

After multiple Canadian tours in the late 1990’s, ETH made waves in the US in 2004 with a feature length performance documentary called “Live at Lanigan’s Ball”. Following extensive airing of the special on PBS in more than 80 markets around the US, the band was invited to perform at Celtic and folk festivals across the US, Canada and Europe. Touring tirelessly, they amassed a legion of diehard fans who are known to cross continents and oceans for shows.

Shunning the traditional industry model of a band maintaining distance from its fans, Enter The Haggis has worked hard to develop personal relationships with their supporters, (affectionately known as “Haggis Heads”). They regularly take the necessary time to shake hands and chat after performances, broadcasting shows online for free and even inviting fans to join them in the studio to sing and play on record. It’s thanks to this close connection that the band’s last three albums were entirely financed through crowdfunding platforms that raised over $150,000 US. 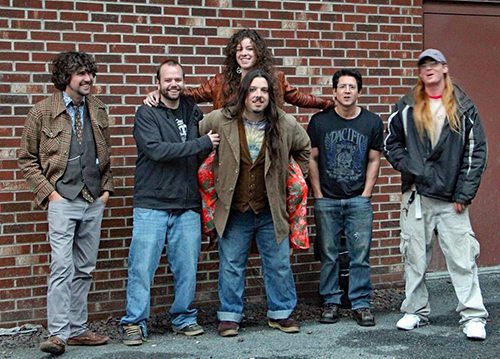 Black Mountain Symphony showcases an eclectic range of influences, blended together to create their own special sound. From baroque classical violin and haunting folk-tinged ballads to funk-rock drums and hard-hitting dance numbers, the 6 piece band sprinkles their live sets with hints of everything from classical music to bits of New Age, Rock and Folk.

Whether touring nationally or performing at their favorite local digs, this up-and-coming group of musicians features a roundtable of powerful lead vocals and harmonies that dance with captivating violin lines and soar over stunning soundscapes, shaped by years of classical training infused with an irresistible love for musical roots and a fresh, ultramodern mentality.

Evocative of such artists as Fleetwood Mac, The Corrs, Yes, Belle & Sebastian, Damien Rice, Guster and The Dave Matthews Band, the group implements the same skill and vision on cover tunes as they do in their own carefully crafted compositions, and in the process manage to capture something unique and refreshing… This is Black Mountain Symphony.