Live Stream Tickets: $15 – Click Here to Purchase
*Note: Link to the live stream will be emailed to purchasers 24hrs before the event.

The event will kick off with an hour long “mix & mingle” at 3:00pm, followed by our Celebration of Life event from 4:00pm – 8:00pm. The Celebration of Life event will feature the David Cassidy Remember Me Awards ceremony, which will give out awards in various categories and honor those who exemplify the heart of David.  We will also honor 70’s Long Island, New York based band Danny Calvagna & 45 RPM.  Danny sadly lost his life to COVID-19 and DCMLG will offer a special tribute to Danny who warmed our hearts with the music that he and his band 45 RPM performed.  In addition, videos showcasing three band,  Sly Fox & The Hustlers, RBones Revival and Twice Removed will also be shown on the big screen.  There will also be a silent auction to raise money for various charities that David Cassidy held dear to his heart including: The National Museum of Racing and Hall of Fame, The Thoroughbred Retirement Foundation, Friends of Saratoga County Animal Shelter and Columbia Greene Humane Society.

The event will then continue into the evening with a live performance by Joe’s Boys, performing a variety of David Cassidy’s solo work, music from the Partridge Family and “good time rock n’ pop” songs from the 60’s, 70’s 80’s and beyond.  They will be joined by special guest, Vance Brescia.

David Cassidy was more than an extremely talented vocalist, composer, author, producer, director, actor and amazing Broadway/theatre entertainer; he was a philanthropist who gave generously and often times anonymously to various charities.  He was an avid horseman who owned, bred and raced Thoroughbreds. He owned and loved various animals. For this reason, The David Cassidy Memorial Legacy Group is committed to furthering his legacy, with charity events such as this one.

Please feel free to reach out to the David Cassidy Memorial Legacy Group at: [email protected] 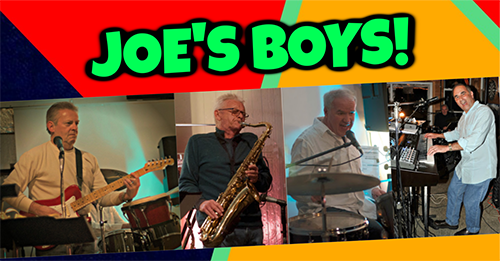 The “good time rock ‘n pop” sounds of Joe’s Boys have been capturing audiences from Albany to the Adirondacks for well over 20 years! The ‘Boys, during the past year or so, have performed numerous times at great Capital District venues such as Schenectady’s “Rivers Casino,” Saratoga’s “Parting Glass,” Watervliet’s “Rusty Anchor Barge,” “NaNola” in Malta, Ravena’s “Yanni’s Too,” “Martel’s Grill” on the beautiful grounds of the Town of Colonie Golf Course – and many other terrific venues. And, we have even performed at Proctors Theater – opening up for Herman’s Hermits, B.J. Thomas and the Grass Roots!

Through the years, Joe’s Boys has been selected to perform at a number of special Capital District community events, including several “Hats Off to Saratoga” celebrations, community park events in nearby Niskayuna, Cohoes, Rensselaer, and Green Island, and, on several occasions, even the huge “Hudson-Mohawk Marathon and Mini Marathon” at the Amphitheatre of Albany’s Corning Preserve.

Joe’s Boys has even been the headline musical act – twice – at the incredible “Carrot Festival!”

The band’s music and crowd-pleasing personality are just made for YOU!