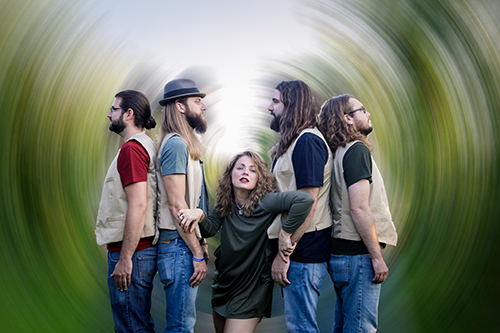 ** The online presale period for this show has ended.  All remaining tickets will be available at the door

Hayley Jane & The Primates combine Americana, soul and rock & roll with rich lyrical imagery that electrifies the heart. At the helm is rising star, Hayley Jane. She leads the band through an infectious live experience filled with powerful vocal range, vibrant dance choreography and dramatic performance that captivates her devoted fanbase.

Hailing from Boston MA, the band was the winner of the 2014 New England Music Awards’ Roots/Americana Act Of The Year and has been performing at premiere venues and festivals across the country. Hayley Jane has also established herself as a strong female presence in the national music scene and was recently featured in the RELIX “Women Who Rock” Issue.

The band’s first full-length album, Gasoline, was engineered by Brian Wallace of Sublime and released in 2014. The album was recorded during a West Coast Tour that kicked off at the iconic Whisky a Go Go and ended with a Monday Night Football performance at Qualcomm Stadium.

Hayley Jane and the Primates released their sophomore album “We’re Here Now” in the Fall of 2017. Produced by Craig Brodhead of Turkuaz, the album carries an energy and poetry that represents the best of American music.

Let’s Be Leonard is a rock ‘n roll jazz explosion out of Upstate NY that bursts at the seams of tight, lyrical pop ballads with a daredevilish, looney jam band quality that’ll hook you like a lil fish.  A full-­fledged caravan, all five band members quit their jobs, invested what money they had into equipment and a tour bus, and have been living together in a musiccentric collective lifestyle since early 2015.  They are the darlings of their hometown, Saratoga Springs, NY, where local radio stations WEQX 102.7 FM, and WEXT 97.7 h​ave kept the singles from their debut album “C​OW.”, Kindergarden Blues and Frisbee, on steady rotation, and where their renowned barn parties have been known to draw crowds of just over six hundred.