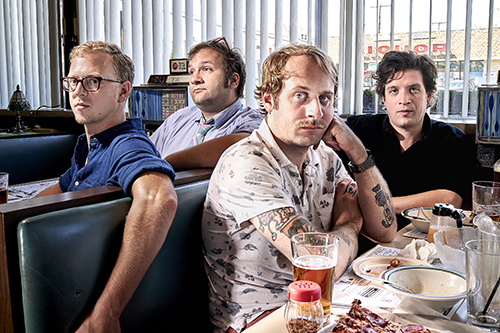 The best art often challenges widely held preconceptions about performance and beauty. We’re moved when we find the sublime in the gross, entranced when crassness collides with grace. It makes poetic sense that one of this practice’s finest current purveyors is named after a blood-sucking survivor.

“I think a lot of my favorite artists have always done stuff like that,” Deer Tick front man John McCauley says from his home in Nashville, reflecting on his band’s love of unexpected mashups: tender lyrics layered over pissed off guitars; classical music flourishes delivered nearly naked and high. Deer Tick’s perfected it all, mostly as an outlier, revered by a legion of fans, respected by peers,but not part of any one scene. With their highly anticipated new project(s), two new albums released simultaneously titled Deer Tick Vol. 1 and Deer Tick Vol. 2, the crew from Rhode Island prove that their punk-roots rock has only gotten better with age.

McCauley sees the two records as a natural progression. “I think it’s something that was bound to happen, just because I’ve always had one foot in each door,” he says. “Every album we’ve put out has had its manic moments in one way or another. I felt good enough about everything that I was writing to think that we could truly separate our two big interests: quiet and loud.”

It’s been six years since Deer Tick’s last release Negativity, and devotees have grown restless. It wasn’t that the band—made up of McCauley, guitarist Ian O’Neil, drummer Dennis Ryan, and bassist Christopher Ryan—was withholding information. They just weren’t sure they had anything more to share. “It wasn’t anything that we actually talked about,” McCauley says. “We never said, ‘Hey, we should take a break,’ or ‘Maybe this isn’t working anymore.’ We just took some time off. We’d just done our 10-year anniversary shows, and I had a kid like two weeks later.” He pauses before adding with a hint of a laugh, “We just kind of got comfortable away from each other.”

McCauley, O’Neil, and the two Ryans popped up solo and on others’ projects. Personal lives also underwent massive changes, especially for McCauley, who married Vanessa Carlton and became a dad. The couple’s little girl is now two years old. For the first time ever, Deer Tick—an all-consuming band known for constant touring and steady artistic output—took a backseat.

When the band came back together for their beloved after-party shows at the Newport Folk Festival, the reunion reminded them what they missed about creating with one another. “Playing that week with the guys made me really want to do it—it made everyone want to do it,” McCauley says. “So we started making some plans to go in the studio.”

The result, recorded at Ardent Studios in Memphis, Tennessee, is a bold double punch that reminds us not only why Deer Tick has been so missed, but why they’ve become important artists. The songwriting on both volumes is masterful. McCauley wrote most of the tunes alone, but O’Neil and Dennis Ryan also make killer contributions. Self-aware and never self-important, McCauley excels at provocative lyrics that are sometimes confessional, sometimes accusatory. His compositions capture those internal contradictions that define us, like rock-and-roll “songs of myself” delighting in the multitudes and putting them on display.

Vol. 1 opener “Sea of Clouds” is a dreamy mediation on letting go, featuring stripped down instrumentation that swells into a mini-symphony, all anchored by angelic harmonies and McCauley’s familiar melodic snarl. It’s not the only time McCauley mulls over what it takes to move on. Heart-tugging “Only Love” mixes sadness and hope for a snapshot of impending loss. “I thought, ‘Nobody writes a song about that kind of weird, ominous feeling you get in the final 24 to 48 hours of a relationship,’” McCauley says. “I wanted to capture that mood in a song.

”Sauntering “Card House” is a flamenco-soaked threat with grotesque imagery, while lounge-ready “Cocktail” is a wry, piano-fueled stroll through fond boozy memories. “I guess it’s kind of a song about my strange relationship with alcohol—I’m still learning how to deal with it,” McCauley says. “I’m not a teetotaler. I’ve tried that. It’s not for me. I’m not into the support group thing. I enjoy life with a drink. Trying to keep my life in balance can be hard, but it’s something I’m capable of doing now.

”Tricky relationships with drugs and alcohol are addressed in different ways on both volumes. Hushed Vol. 1 closer “Rejection” pulses with vulnerability. “I wrote it about trying to help somebody in some way,” McCauley says. “What was going through my mind but I didn’t say in the lyrics is just reaching your hand out to somebody who’s going through substance abuse problems.” Vol. 2’s “Jumpstarting”—a favorite track of McCauley’s—offers the same kind of lifeline: he shouts startlingly sweet promises over crunchy guitars.

“Look How Clean I Am” immediately follows. Written and sung by O’Neil, the song doesn’t poke fun at sobriety but offers a droll takedown of how some use it as a means or marketing vehicle to further celebrity. It’s one of many genuinely funny moments on the project. Jumping “S.M.F.,” (aka Shitty Music Festival) written and delivered by McCauley, takes hilarious shots at a summer institution. “I thought I’d write that one for any band who’s ever had a bad time at a music festival. It’s one of my attempts at humor on the record, but then it just kind of comes off as anger,” McCauley says with a laugh.

McCauley wrote gorgeous instrumental “Pulse” thinking about the 2016 Orlando nightclub shooting. He lets his piano do the talking. “It’s a Whale” is punk perfection, all screams and growling guitars. “That’s probably the most political I’ll ever get in a song,” McCauley says. “I tried to put myself in the really dark headspace of maybe a men’s rights activist or something like that while trying to poke fun at it.” His chants of “Atta boy! Atta girl!” are the ideal blend of smirk-inducing and scary.

McCauley says he believes “Sea of Clouds” and “It’s a Whale” probably best capture the “extremities” of both records. He’s right, of course: it’s Vol. 1’s quiet vs. Vol. 2’s loud—Deer Tick’s dual personalities, finally channeled onto two distinct and equally brilliant records. “These albums represent a new phase of my life that I haven’t entirely figured out yet,” McCauley says. “I don’t really know what’s going to happen, but that’s part of the excitement for me.” 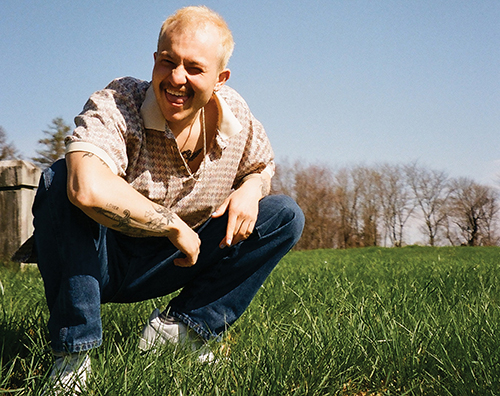 Izzy Heltai lives with his mom. A lover of “meaningless” flash tattoos because of their limitless nature, Izzy is covered in skulls, snakes, animal heads, and femme silhouettes. He dresses like a sixteen-year old boy. He eats more fruit than the average person and makes really good music. You’ll like it a lot.

Izzy Heltai’s roots grow from the tireless grind of DIY shows. His early, self-booked tours were both extensive and eccentric – the venues including VFW dive bars, coffee shops, and once as the intermission between two sets of a Grateful Dead cover band. It was in this unpredictability that Izzy Heltai found his expansive and prolific voice as an artist – the relentless hustle became an abundant source of inspiration for his curious and observational style of songwriting.

In “Day Plan (5 Songs Written 4 the End of the World)”, he creates moments you could hum to yourself in a moment of introspection or scream off the top of a parking garage at 2am – either would feel like a catharsis. His music is as nimble as it is grounded – walking the seam between confessional lo-fi musings and raucous basement rock. Sonically unpretentious and lyrically relatable, Izzy invites you into his world like a conversation with a best friend over a cigarette on the back porch – the moment of clarity you didn’t know you needed.