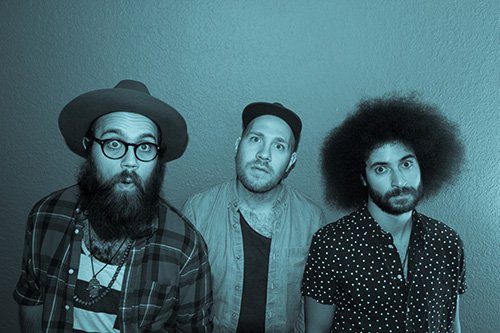 * The presale period for this show has ended.  All remaining tickets will be available at the door.

Come join Wild Adriatic as they celebrate their 1,000th show!!

Rooted in the rowdy spirit of rock & roll, Wild Adriatic has built an international audience on a combination of groove, grit, and guitar-heavy swagger.

With the power trio’s newest album, Feel, bandmates Travis Gray, Rich Derbyshire, and Mateo Vosganian update the sound of their influences — from Seventies rock to Motown to soul — for a contemporary audience, taking influence from the past but never losing sight of the present. They aren’t revivalists; they’re modern men, carrying the torch of melodic, riff-ready, high-energy rock into new territory.

Whittled into sharp shape by a touring schedule that’s kept them busy for roughly 175 days a year — including two European tours, countless stateside runs, and appearances at festivals like Bonnaroo — Wild Adriatic’s three members recorded Feel in Austin, teaming up with Grammy-nominated producer Frenchie Smith in the process. The goal was to shine a light on the band’s strength as a live act, avoiding click tracks, digital instruments, sampled sounds, and other tricks of the recording studio. Instead, Wild Adriatic focused on the same core ingredients — Gray’s guitar playing and soulful sweep of a voice; Vosganian’s percussive stomp; Derbyshire’s in-the-pocket bass — that helped kickstart the band in 2011, back when Wild Adriatic formed in Upstate New York.

From the psychedelic “Chasing a Ghost” to the mellow, horn-filled “Come Baby Baby” — the latter song featuring blasts of brass from the West End Horns — Feel offers up 11 new songs of modern, analog, groove-heavy rock, with Wild Adriatic taking inspiration from breakups, friendships, new relationships, tour stops, and even politics. “Appleton” finds the guys paying tribute to the Wisconsin town that’s hosted some of their most most memorable shows, while songs like “Some Nerve” and “Hurricane Woman” channel the influence of guitar greats like Stevie Ray Vaughan and Joe Walsh. Much of the album came together during five separate writing retreats, including treks to Virginia, Texas and Wisconsin. Throughout it all, the songs were written collaboratively, molded by a band of longtime friends who, more than a half-decade into their career, are still turning over new leaves.

“This feels like our first record all over again,” says Vosganian, a childhood friend of Gray since his elementary-school days. “We’re a rock and roll band at heart, but we have heavy ties to soul and blues music, too, and as the band matures, those roots come out. This is a great way to reintroduce ourselves.”

Gray agrees, saying that the real-life inspiration behind most of the album — a painful breakup — helped Wild Adriatic create a record that ultimately celebrates the electricity and elation of playing in a traveling band.

“These songs align with everything we’ve gone through in the last year,” he adds. “They highlight hard times, but also underlying hope and optimism. We’re people. We’re supported by fans who buy tickets and come out to shows, and we like to hang out with them. We aren’t trying to take ourselves too seriously. We’re trying to connect. We’re trying to feel.”

After Funk is a fun filled, soul driven, funk-rock explosion.  Hailed as “The grooviest band north of the border” (Live for Live Music), the Toronto based funk family have been blazing a trail through the North American music scene leaving only happy hearts and dancing feet in their wake. The combination of Yanick Allwood (keyboards &amp; vocals), Jaime Rosenberg (drums), Justin Bontje (bass) and Phil Tessis (guitar) results in an infectiously fun show, as well as virtuosity and beauty that will challenge your musical mind. After Funk’s sound and hard work has not gone unnoticed; being selected as the Electric Forest’s Instrumental Forester in 2014 earned them two sets at the festival and they have served as support for Walk Off The Earth, Lettuce, Snarky Puppy, Dumpstaphunk, TAUK and more.

The band has released 2 albums to help you prepare for the experience: ‘Til The Sun Comes Up features Canadian hip hop legend Choclair and earned over $10,000 in crowdfunding presales and their self-titled debut EP was mixed and mastered by Alan Evans of Soulive. Both albums promise to have you rocking out and singing along to catchy melodies and funky grooves. But if you truly want to find out what comes after the funk, you’ll just have to come experience it for yourself.