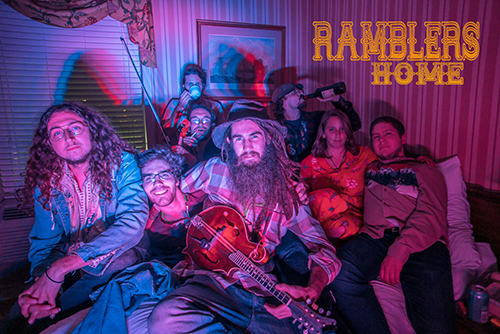 Ramblers Home is a band that has grown from the seeds of traditional bluegrass music. Displaying their old-time roots proudly the band weaves together elements of blues, country, swing, soul, jazz and rock n roll. From the backyards of Austin, Texas to the streets of Saratoga Springs, the Ramblers have moved and grooved into many shapes and sizes. But despite their changing nature, what remains as a constant is a community of musicians who sure do know to play.

Ramblers Home provides their audience with perfect harmonies and mesmerizing improvisation that combines authenticity with the raw talent of traditional picking. The Ramblers play everything from original music to funk classics and old fiddle tunes and will get you smiling and dancing wherever they are playing. Ramblers Home is a part of the tight-knit musical community of the Capital Region. You’ll recognize many of these musicians from bands such as Let’s Be Leonard, Candy Ambulance, the North and South Dakotas and the Saratoga Strings Band.